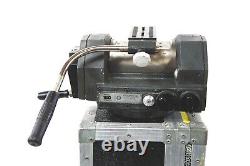 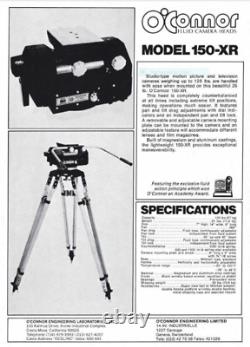 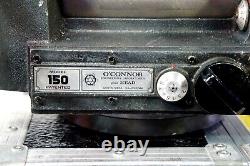 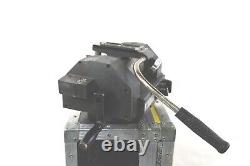 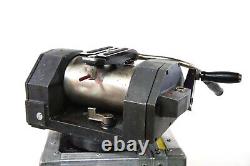 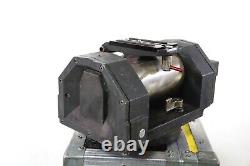 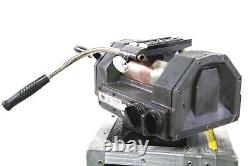 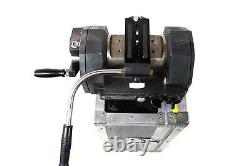 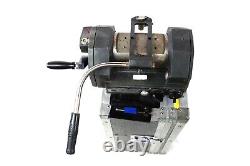 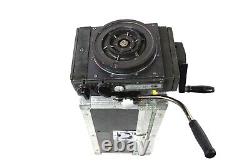 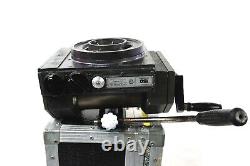 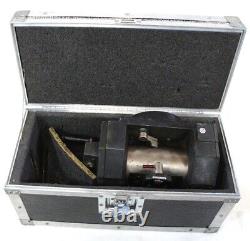 O'Connor Model 150XR Fluid Head. Includes Quick Release Camera Plate And Arm. MADE IN USA O'CONNOR FLUID HEAD NO TRIPOD - - JUST AFTER PROFESSIONAL SERVICE 100% WORKING - LAST FOREVER! NEW O'CONNOR WEDGE CAMERA PLATE WITH SCREWS. O'CONNOR PAN BAR HANDLE. All pictures are of the actual items for sale. O'Connor Fluid Tripod Heads are considered to be the industry standard, at least in the US for film and digital cinema. The smooth, solid feel of the movement is legendary.

Reason for the ultra-smooth feel is due to the difference in O'Connor's fluid drag mechanism. Sachtler, Miller, CARTONI, VINTEN etc, use a series of fluid modules in each axis... Up to 4 or 5 for the heads that have 7 or more discreet fluid drag settings. The various settings are activated (to simplify it) by pins that drop into slots to sequentially engage the drag modules.

Each one of the modules has one or two O-rings to seal the fluid into the module and there is always a little friction in each o-ring... Something you just can't eliminate altogether.

Thus, you can have many o-rings per axis, with each adding a slight bit of friction... Friction that has to be overcome when you start a move.

O'Connor has one module per axis, with the ability to vary the drag. The module via a very ingenious mechanical design...

Eliminating multiple O-rings and therefore less friction. If you remember from high school science class. The coefficient of static friction is more than that of moving friction.

Thus the "stiction" when you start a move. Besides O'Connor's step-less fluid drag settings, the other big thing is the ability to infinitely vary the counterbalance also via a step-less design. Often when using Sachtler (and other heads) the balance would be between two of the discrete settings. O'Connor heads have another ingenious design in that the counterbalance is infinitely variable from the lightest up to the maximum with no steps. They call it "Sinusoidal" in that the balancing force is not linear, as with other heads, but increases in a logarithmic fashion with the angle of tilt.

The load moves in a circle as you tilt, rather than a straight line. Therefore the counterbalance force needs to vary with the tilt angle in a non-linear fashion.

Another way of saying it. 60 degrees of tilt requires more counterbalance than twice that needed at 30 degrees. O'Connor is the only head in my experience that does this. The downside of all of this infinite variability is the fact that it takes more time to make drag and counterbalance adjustments on O'Connor heads. Are quicker to set, and as an operator, that can be good when time is critical.

You just have to weigh the differences and decide what is important to you. All things considered, I feel the quality of one's camera moves override the little extra time it takes to change the drag setting, etc. If you are often changing from primes to big zooms lenses and back... Then often dialling in new counterbalances can become an issue.

The last advantage that I feel O'Connor has over other heads is the reliability of their mechanical design. The fluid drag module is elegantly simple...

No pins that drop into slots to activate the various modules in the heads with discrete drag settings... Pins that over time will wear and not fit quite as snugly and then there is a slight "backlash" or. The same can probably be said for any of the high quality heads like Sachtler, Miller, etc... Even though they are expensive versus cheap made - they are all long term investments. It is strictly my thoughts, based on 48 years using O'Connor heads, along with many others.

Is specialized in Sales, Service. Our time around to fix - one day! ALSO we do Rentals of OLD AND NEW Camera Support Equipment such as Sachtler, O'Connor, Vinten, Cartoni, Miller, Libec, Manfrotto, Arri, Mitchell, CSI/Daiwa, Shotoku, and more. With more than 48 years experience in camera support systems repair, our business has been providing quality repair service at reasonable rates to Rental Houses, Broadcast Networks, Professionals, Hobbyists and other repair shops since 1972. Unlike others, WRC is first and foremost a service facility.

We Deal in Both-New & Used. Feedback is very important to us. We would appreciate if you would leave for us 5 stars feedback. You have received your item. We request that you please attempt to resolve any problem by first contacting us before leaving feedback or open return case as problems tend to be a straightforward case of miss-communication. This item is in the category "Cameras & Photo\Tripods & Supports\Tripod Heads". The seller is "frwl0007" and is located in this country: CA. This item can be shipped to North, South, or Latin America.