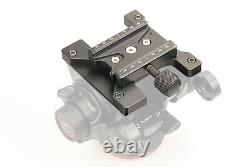 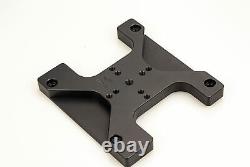 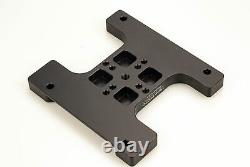 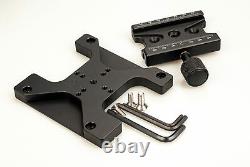 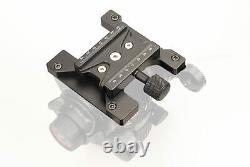 New Hejnar Photo conversion set for Manfrotto M504X Head. This combination of plate and clamp will let you use Manfrotto head with any arca swiss equipment. Manfrotto 504X use Manfrotto clamping system. Arca-swiss plate fans can now bypass this and use M504X with Arca type plates and L brackets. Arca type clamp mounted on 504X can disconnected from plate and use independent on other equipment if needed.

Clamp can be positioned in relation to adapter plate in 90 degree increments to make it convenient for everybody. It is the best quick release system for tripods and monopods. International standard dove-tail clamp, compatible with Arca-Swiss type quick release plates. Adapter plate is attached to Manfrotto head with the same 4 screws as original top mounting plate.

This prevents free fall when the clamp is not fully closed and yoru plate has safety stops. Knob is captive and stops at maximum opening; cannot be lost in the field. Backside has groove to match ball head post and prevents it from twisting. And many other Arca style Quick release plates.

The seller is "krosno65" and is located in this country: US.